The life of Swathi Thirunal was an offering in music to God. A rare renaissance personality, Swathi Thirunal was a king among musicians and musician among kings. His musical compositions and his life were a mutual translation of his devotion to LordPadmanabha, the presiding deity of the Travancore Royal House....
More>>>>
Swathi Thirunal Rama Varma
was a progressive ruler who lived ahead of his times and was committed to the welfare of the people. Being an able administrator his far sighted reforms were responsible for introducing modern medicine, English education and a humane judicial system in Kerala....
More>>>>

While a senior government officer like a Magistrate had a monthly salary of 40 rupees, Swathi Thirunal fixed a salary of 100 rupees for Vadivelu.

Vadivelu is believed to have influenced most of the dance compositions of Swathi Thirunal, especially Pada Varnas. Swathi Thirunal also assigned the role of assessing visiting musician before they were let to perform before Swathi Thirunal. Vadivelu’s ancestor was one Gangai muthu who lived in the 17th century and was a devaram scholar, who is believed to hail form Tirunelveli. Gangai Muthu had two sons, Ramalingam and Gangamuthu. Gangmuthu had two sons Subbarayan (also known as Mahadeva Annavi, an accomplished veena player) and Chidambaram. Subbarayan had 4 sons: Chinnaya, Ponnayya, Sivanandam and Vadivelu. While the quartette was residing at Senkanar Kovil doing tiruppani, King of Tanjavoor brought them to Tanjavoor, in recognition of their talent. The quartette got an opportunity to become disciples of Muthuswami Deekshithar. Deekshithar is said to have noticed that Vadivelu could repeat a song, after listing to it me. Ponnayya, the send of the brothers is the composer of the Maya Malava Gaula Kriti “Maaya atheetha Swaroopini” (popularised) by D.K. Pattammal and M.D. Ramanthan). This kriti makes to Deekshithar in the line “ma guruguha swamiki ne dasudai’’.
After training under Deekshithar, the quartette became Asthana Vidwans at Tanjavoor court. It was during the time that Swathi Thirunal’s fame was spreading all over South India are Vadivelu naturally joined the flow of musicians to Travancore and arrived at Trivandrum. While Vadivelu was 22 years of age, he was Asthanavidvan of Tanjavoor court for 8 years.
Vadivelu’s skills as a vocalist, dance expert and violinist immediately caught the fancy of Swathi Thirunal and he was immediately at a salary of Rs 100 per month as him brothers at a lesser salary. Vadivelu was a scholar in Tamil and Telugu and his violin mastery is said to have been unmatched, that he could accompany himself on the violin. Vadivelu seems to have learned violin for European missionary in Tanjavoor. Vadivelu and Subbarana Deekshithar (Muthuswamy Deekshithar brother) are beleived to have introduced Violin to Carnatic music. Swathi was fully convinced of the importance of violin to Carnatie music that he ordered it be used in concerts and gifted a rare violin made of ivory to Vadivelu, in 1834. Swathi also built a house for Vadivelu in Aryasala. Vadivelu has contributed significantly to dance also. He started use of mridangam as an instrument in dance performances and propagated the Pandanaloor style of dance. He is also believed to have a role in either inventing / transforming Mohiniyattom dance form of Kerala. The sequence of pieces follows in dance performances today (Allaarippu, Jatiswaram, Sabdam, Varnam, Padams, Javalio, Thillana and Slokam) are also his contributions. In addition to his own composition he is known to have been the reviewer and critic of Swathi’s dance composition. He has composed a Telungu translation for Swathi’s Sooma Sayyaka Varnam is Kappi. Murugan Kavuttuvam in Goula and Sarasijaakshulu in Kaamboji are known to be Quartette’s composition in addition to Ponnayya’s beautiful Maaya atheetha in Maya Malava Gaula.

All of them were entertained in the service of the Maharaja in 1835Vadivelu on a monthly pay of Rs.100 and others on slightly lower sums. A lump sum of Rs. 700 was also given to them on their arrival, presumably by way of their traveling expenses. Later on, a house was also built for them at Aryasala. This quartette influenced the Maharaja in the composition of the dance forms of music like Varnas and Padas.

Vadivelu was responsible, along with Baluswami Deekshithar, the brother of Muthuswami Deekshithar, for the introduction of violin in Karnatic music. Although Western in origin, in its present form, this instrument enables the presentation of all the subtle nuances and tonal shades that characterize our music. The attempt of Vadivelu to adopt into our music, generally met with the approval of the patrons and the encouragement of the public, as our music has never been averse to incorporate and assimilate exotic elements that would add to its charm without affecting its basic framework. The demonstration of the violin before Swati Tirunal evoked his immediate response. He was convinced of the rich potentialities of this nice instrument in accompanying the vocalists in concerts. In the place of Veena, which was till then the accompanying stringed instrument for the concerts in his court, he assigned the violin. The Veena itself was raised as a principal concert instrument. In appreciation of Vadivelu’s service in the introduction of violin in classical music and his profound skill in handling it, the Maharaja presented him an ivory violin which was got made by a native craftsman. This beautiful violin is still cherished as a valuable treasure by the descendants of Vadivelu at Tanjore.

Swati Tirunal found in Vadivelu a worthy consultant and a ready collaborator in his compositions for Bharatnatyam like the Varnas, Svarajatis, Padas and Tillanas. This close association naturally led to intimacy. Vadivelu became the recipient of frequent gifts of money materials. For his daughter’s marriage he was given a donation of Rs.700. But in spite of all this, there was a short period during which Vadivelu was denied audience with the Maharaja for some unknown reason. He even changed residence from Trivandrum to Haripad. But at the intervention of some other senior musicians in the court, the two were reconciled, and in gratitude, Vadivelu composed a Varna in Nataraga in praise of the Maharaja and presented it in a dance recital before him. At the end of the performance, Swati Tirunal spoke to Vadivelu appreciating his skill displayed in the song as well as in its presentation in the recital, but as an anticlimax, as it were of all this appreciation, warned him not to repeat it again. He said, “Your song is in my praise, it must have been in His name; music is not worth its name if it has any lower aim.” Vadivelu was surprised and submitted that he had sung of the Maharajas of several other states and had got only their encomium, and so here too be did the same as the king was spoken of as the visible God. The Maharaja curtly told him that in his own case Sripadmanabha was the God, none else. Vadivelu became sad and wise and the next day he presented the same Varna with a changed Sahitya praising Lord Padmanabha and representing Swati Tirunal as Padmanabha and representing Swati Tirunal as Padmanabhadasa and got his approbation. This is the Atatala Varna ‘Sammugamu’ in Nata. This incident reveals how much of a devotee Swati Tirunal was and much he despised even legitimate praise, let alone flattery. It may, however, be noted that this event must have occurred towards the close of Swathi Thirunal’s reign when he was leading a life of absolute self negation, because other songs in his praise by Vadivelu and several others are known.


Vadivelu is said to have visited Thyagaraja to invite him to Thiruvananthapuram, and it is not known positively whether Thyagaraja came down to Thiruvananthapuram (except that there is a reference in Govt records of 1830 to one Thanjavoor Thyagarjan being honoured). Vadivelu had introduced Kannayya Bhgattar to Swathi and he was immediately accepted as a courtier. From both Vadivelu & Kannayya Swathi is said to have listened to Thayagarja Krithis and sent Vadivelu to invite Thyagarja. Vadivelu tried to attract the attention of Thyagarja by staying in a house nearby and singing there.It is believed that the saint entered his house and praised him - a gesture rarely extended by the saint. He is also believed to have turned down the invitation to Thiruvananthapuram, not surprising, from the saint who song “narasthuthi sukhama?”. This could have happened in 1831 when Vadivelu & Chinnayya are seen paid to Rs. 70 to visit Tanjavoor and return.
Veena Kuppayyar honored him by giving his own exalted seat to him during Vadivelu’s trip to Madras in 1828. Vadivelu’s greatness finds reference in the Great poet Ulloor S. Parameswara Iyer of Kerala. In this poem “Kaattile paattu”, he portrays the story of Vadivelu’s travel from Thiruvananthapuram to Thanjavoor as on the way being robbed of all money and violin. Vadivelu pleads for the violin not to be taken away and plays the violin which melts the mind of the robber who returns the violin. The poem also refers to the great mutual respect and affection Swathi and Vadivelu had to each other. 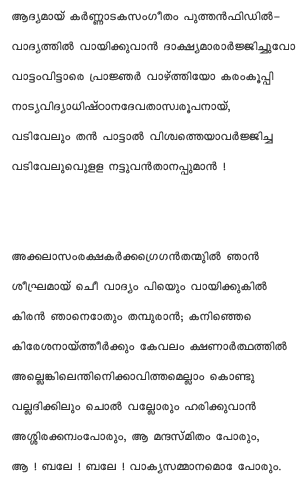